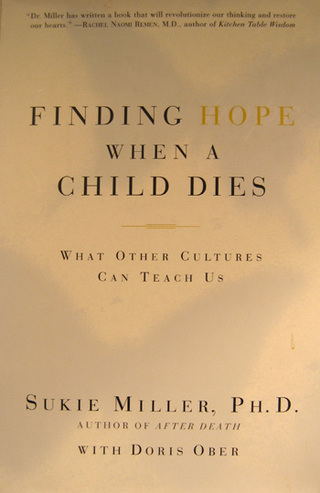 Finding Hope When a Child Dies: What Other Cultures Can Teach Us

From Chapter One:
When your husband dies, you become a widow. When your wife dies, a widower. Children who lose their parents are called orphans. But we have no name for the parent who loses a child, nor for the brothers and sisters of a child who dies, nor for the others--aunts, uncles, cousins, grandparents, even the friends, contemporaries, and adults--who experience the loss of a child they love.

I hadn’t realized the significance of there being no word for a child’s survivors, and no word for the state of having lost a child, until I sat with those survivors over many years and began hearing the unpronounced fears that most people harbor for the children they love--for these almost seem built in, whether we speak of them or not.

The fact that there is no name for the one who has lost a child is of enormous consequence: the nameless live in a kind of limbo. They still exist, but in a new stratosphere where their namelessness effectively isolates them from the rest of the world.

When we don’t name things, they remain out of reach. I have never known a parent or anyone else who has lost a child not to describe a period of feeling completely out of touch, beyond the reach of anyone else’s comfort or understanding. And it’s true. You can’t engage on any deep level with someone whose name you don’t know. You can’t effectively ask for something that you can’t name: “Bring me That--no that--no that!” is unbearably inefficient.

More than 145,000 infants, children, teenagers, and young adults die every year in this country alone. At least as many families experience a miscarriage or stillbirth every year. So many people sharing a similar agony, and we have only the most halting language--a few poor adjectives for what our culture considers the most tragic of personal experiences. They say we are bereaved, or that we are distraught or inconsolable. But this hardly approaches our emotional state and doesn’t nearly describe who we have suddenly become when our child or brother or sister or friend dies. Because we are no longer who we were, and we never will be again.